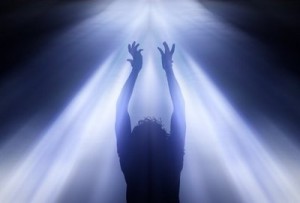 This morning I was texting about my fear to a trusted friend and mentor, when I accidentally typed “sacred” instead of “scared.” The closet Freudian in me recognized a subconscious message coming forth in the slip, and it started a train of thought about the idea that fear can be sacred. That the difference between “scared” and “sacred” is only a barely perceptible re-ordering of symbols for certain sounds… a slight shift of perspective. And sometimes the sacred can indeed be scary.

My fear, the fear we were discussing, revolves around my deer, of course — Deirdre the Seeing-Eye Deer and her juvenile blind companion, Lily. I am afraid that, in spite of all my best efforts, and the efforts of people all over the state, country, and world supporting them and me, that the DEC will win on the precedent of previous case law, and the lives of my girls will be taken anyway. That my girls will be murdered because of some legal loopholes created by the state long ago concerning who owns the wildlife — loopholes that keep these antiquated Neanderthals in power — and a governor who does not believe that their little lives are important enough to take two minutes out of his schedule to help. I fear that I will be shamed and humiliated for having a large and compassionate heart, as I always have in this twisted culture. The way women have been shamed for centuries for seeing things differently and for being able to envision and live a different way of life that does not include torture, murder, and mayhem against each other, or even the other sentient beings with which we share this earth.

And, fearful though I am, I know that it is my sacred duty to keep going, to stand firm. In fact, there is something absolutely sacred in the fact that I am moving forward in spite of the fear. That these deer mean so much to me that I am willing to face possible ridicule and condemnation from the “Powers That Be” in order to save them, and to keep them safe, as I have done since they came into my care. But now I’m keeping them safe not from coyotes or starvation, but from having to face fear and terror and death at the hands of those who don’t see them as anything but commodities. Because they don’t know these deer as I do – as individuals with personalities, their own unique intelligence, and a huge capacity for love. I have to save them from those who are charged with their protection (and I know I’m not the only one who sees the irony in that). I am standing in Sacred Truth so that an agency originally given power by “We, the People” does not overstep its considerable authority in its bureaucratic blindness. I have, for some inexplicable reason, been given a sacred charge — to correct the injustice of this, or at least, to bring it to light.

Another friend referred to what I’m doing as a “David and Goliath” story, but what I have found since standing up against this state-mandated animal cruelty (for it would indeed be cruel to actually abide by what they are insisting be done to these does) is that there are so many more stories like this that we have not even heard of, and why? Because of some outmoded idea that wildlife can be owned by a state? And that it’s okay for the state to imagine itself as some benevolent father-figure god, bestowing licenses for citizens to rescue/care for his wildlife with one hand, while simultaneously doling out death sentences for his wildlife with the other? We don’t hear about it because we have become so complacent and so indoctrinated into this idea that we are powerless against the state, that we just roll over. And granted, with their inexhaustible supply of taxpayer money, the system makes it rather impossible for one individual who is having his or her rights tromped on by a state agency (with the absolute autonomy of this one) to have any recourse. We have forgotten, my dear fellows, that the state is US. You and me. That there really is power in numbers. That (in the immortal words of Thomas Jefferson), “when injustice becomes law, resistance becomes a duty.”

What this agency wants is so wrong in this instance, and yet it’s so simple to fix it in a humane and moral way. Their reluctance to do so baffles and confuses me, but perhaps, knowing what I know about soul loss, it should not surprise me. The state of NY is in desperate need of a soul retrieval.

I wonder if their campaign against me is motivated by fear as well. I wonder if they are afraid that I am upsetting the status quo, and afraid that perhaps this issue has the potential to steamroll into ruining the state’s multi-billion dollar big game hunting income. I doubt that would ever happen, since deer are seen as a nuisance species. On a more personal level, I wonder if they are afraid for their cushy government jobs, if only because there were mistakes made on the DEC’s end, too.

Some of the opposition have put forth the idea that if I am allowed this license to possess, then 1400 other NY rehabilitators will want it, too (in spite of the fact that there are probably a hundred or so of those wildlife rehabilitators who have already been issued this license to possess – some are even listed on the Web). And I also keep wondering how many others will have this unique set of circumstances – a blind doe and her seeing-eye companion living in the perfect situation for them, with someone like me willing to offer lifelong care with my own money.

The agency continues to try to make me out as the “bad guy” here. They throw up a smokescreen to confuse people about the real issue, which I believe is that they want these two does dead for punitive reasons. How DARE I question their edict? They are publicly trying to call my competence as a rehabilitator into question. They are fear-mongering about the apparent “dangers” of keeping these two innocent, defenseless does. They are trying to paint me as some heinous criminal for keeping Deirdre out of harm’s way when she proved not to ever really be ready for the wild, and they are saying this is my fault (as if there is any blame to be laid, under the circumstances). And even some other rehabilitators have drunk the Kool-Aid; really, truly believing that it’s preferable to kill these healthy, sentient beings, rather than allow them to live the rest of their limited days in their home where they are safe and happy. But oh, wait – nobody seems to be considering what’s best for these two deer, except me. That is the place I have been coming from all along: a place of love and concern for the individuals in my care. That loving bond between us is sacred, for they are also children of the Creator.

Someday, maybe something enlightening will happen for my detractors, an experience with an animal or two that opens their eyes and their hearts and becomes a stepping stone to their spiritual evolution. One can only hope. Until then, I will maintain this sacred and yes, terrifying, path toward justice for these two does…with the fear for their lives, this sacred fear, as my impetus. Because all life is sacred. Not just human life or the lives of our domestic pets, but ALL life. From that place of understanding, we can come together and actually change the world. THAT is a really scary thought; scary for both those in power, and for those of us that find ourselves thrust forward as the catalysts for change.

Courage is feeling the fear and doing it anyway. Because it’s right.