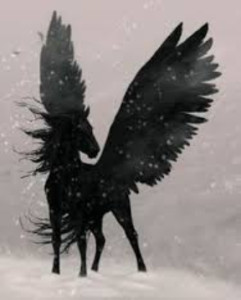 After my horse Dare clocked my noggin, as I mentioned in Part I of this blog (which you can read here if you like), I suffered post-concussive syndrome. Post-concussive syndrome is a collective term for the after-effects of mild traumatic brain injury. As a shamanic practitioner and a scientist, I was intrigued by the recovery process that I was experiencing. I took note of the things that were different about me and the slow progress toward recovering my normal brain function again.

One of the effects I was left with was blurry vision. I had halos around every letter, and it didn’t matter if it was a road sign or a textbook. I saw an optometrist and she said my eyes were fine, but that my brain was telling my eyes to do two different things. She prescribed two sets of glasses, no-line bifocals and readers with yellow tinted lenses (because the glare from the white page was too much for me), in the hope that as my brain recovered, my eyes would strengthen and normalize again and I might not need them. The optic issues have been the slowest to recover of all my symptoms. I am still wearing the readers, but the good news is that my eyes have improved enough that I need a different bifocal prescription.

But at first, even in my shamanic journeys, I could not “see” as well as I did before. I have always dreamed in vivid color, and my journeys were the same: visually vibrant and multi-sensory, very much like real life. Now they seemed less vibrant, duller. The input still came, Spirit still spoke to me, but the signal was not coming through as strongly. I can liken it to a television with rabbit ears instead of cable: I could still see the picture, but it was fuzzy. I felt like my connection wasn’t as secure as it was before the accident.

At a point in my recovery when I finally felt able to sit through an entire day of training, I decided to go take a weekend shamanic workshop in Toronto. I took my partner with me because I was not comfortable trying to navigate in an unfamiliar city on my own with my brain not yet at full capacity. He was wonderful about it; he escorted me on the subway back and forth to the workshop and made sure I was heading in the right direction. So all I really needed to concentrate on was the workshop.

The workshop was about psychopomp work. This is work many shamans do to “pay it forward” in the spirit world, and the first journey was to find a spirit helper to assist with the work of guiding the souls of the dead to where they needed to go. My power animal, whom I had started to depend on so much since the injury for guidance in a world where I could no longer see my way, took me swiftly to a goddess I am familiar with from the Irish pantheon — the Morrigan. I had had a working relationship with the Morrigan previously, so I was not surprised that she was the one to come forward as a teacher and guide for me in assisting the souls of the dead. My vision of her was spotty, however, and I felt her presence more than saw her.

I mentioned to her that I was having trouble with my Spirit Sight since the accident. With a gentle smile she reached over and placed her hand over the top of my head with her fingers spread wide, and I felt a subtle shift of energy. She removed her hand and said simply, “Now you will see again with your spirit eyes.” And it was true; I gazed upon her beautiful face, her long black hair and dark eyes, her emerald green dress, and my tears welled up in gratitude. Indeed, for the rest of the weekend, my journeys were vivid and vibrant and I could see everything again! Since that time, my Spirit Sight has never faltered.

Healing must happen in the Otherworld first, and then that energy is brought through to this world to manifest at last in the physical. In other words, there is no physical healing without spiritual healing.

I have experienced a lot of healing from the spirit world over the past three years. In my sleeping dreams and in my journeys, I am dismembered and re-membered, and each time, something is a little better in my brain. (Dismemberment is a classic shamanic experience and usually signifies spiritual healing and/or initiation.) Sometimes I am given crystals or symbols that they place into my heart or my third eye before they put me back together; other times I am just taken apart, cleaned up, and put back together again. I was sometimes bathed in golden light, and at other times, held in the heart of the Divine. Negative thoughtforms were unraveled, and I was healed in the garden of Nepthys. And in the physical world, I have been guided to other shamans who specialize in (and have provided) the healing I needed at certain stages in my recovery.

At one point, shortly before my horse Alf crossed over, I was becoming frustrated with the pace of my recovery. I felt like I had stalled or had even regressed in some areas. I mentioned this to my doctor, who agreed that I had probably recovered on my own as much as I was going to. She decided to send me to physical and occupational therapy. I worked there with balance and eye convergence exercises, which helped, but not as much as I had hoped.

Then Alf died. Alf was so much a part of me, and he had been sick with his own issues for so long that we were spiritually intertwined; we had so many parts of each other that before either of us could move on (me with my life and him with his next one), we had to be extracted from each other’s energy. We were so entangled energetically that when his spirit left his body, I felt a ripping in MY soul that was excruciatingly painful. For weeks and months after Alf’s death, my helping spirits performed soul retrievals and extractions on the pair of us every time I journeyed. They would remove parts of me and give them to Alf, and take parts of Alf and give them to me, but what they were really doing was exchanging the parts of ourselves, of our own souls, that we had left with each other. And when that spiritual healing was completed, I began to make progress again toward the recovery of my brain function.

It occurs to me now that Alf, even in his own physical decline, had been supporting my recovery spiritually with his own energy. And when his own physical disability became too much for him to bear, I stalled in my recovery because I was, in turn, supporting him with my spiritual energy. We both did this out of love for the other, so we did not mind, and would do it again if necessary. But with Alf crossing the Veil, we needed to extricate our energies from the other so we could each be whole and complete within ourselves again.

Spirit moves in mysterious ways. I don’t pretend to understand how it all works; I just know that it does. I know that shamanic people see first in the spirit world what will be manifested in the physical world. I know that sometimes life is a metaphor for what’s happening in spirit — not the other way around. I am grateful for the ability to walk in both worlds, witness what happens between them, and understand that the most powerful healing force in the Universe is love.